Apeface is a strong presence in any situation. He's loud, rude, obnoxious, and intimidating to everyone he meets. He dominates those around him with his attitude and fearsome countenance. There's some debate among his fellow Decepticons about how much of his behavior is an act, a gruesomely effective psychological tactic to control others and force them to fold under his demands. Others just think he was built that way. Whatever's going on inside Apeface's cerebral-circuitry, he's not saying. The only one he really gets along with is Snapdragon.

As a Headmaster, he is binary bonded to Spasma. Sucks to be Spasma.

His alt-mode is a Gorilla/Jet. 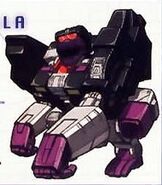 Apeface in Cybertronian Jet Mode.
Add a photo to this gallery
Retrieved from "https://beastwarstransformers.fandom.com/wiki/Apeface?oldid=9048"
Community content is available under CC-BY-SA unless otherwise noted.