Most make the mistake of noticing only Arcee's gender, but these first impressions are quickly expanded upon. Arcee is a merciless and deadly warrior who's an expert in hand-to-hand combat and one of the best sharpshooters on record. The reason for her ferocity is how much she cares for her fellow Autobots and especially the humans they protect. She knows how fragile her organic companions are, and she's equally aware of the evils the Decepticons are capable of. Peers such as Hot Rod and Springer may be more durable than the humans, but she no less fights to defend them as well. They get in plenty of trouble, so someone has to be the level-headed one. (Some believe Arcee has a romantic attraction to either of those two, but that depends on who and when you ask.)

If concern for her friends is her strength, it's regrettably also her weakness. If anything would happen to, say, Daniel Witwicky, she might just completely lose it. And she may be quick, but she's not very strong.

Her alt-mode is a Cybertronian Race Bike. 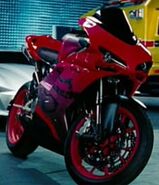 Arcee in Cybertronian Race Bike Mode.
Add a photo to this gallery
Retrieved from "https://beastwarstransformers.fandom.com/wiki/Arcee?oldid=8777"
Community content is available under CC-BY-SA unless otherwise noted.