Blaster loves all Earth music, especially good, hard, LOUD rock 'n' roll. He can be found at the forefront of any situation in which he's involved, be it getting down and truly hopping to town, or kicking butt and taking names—both of which he does well, and both of which have led him into conflict with authority at times. Blaster marches to his own beat, whether it's a pounding bassline or pounding Decepticon skulls, and he's not shy when it comes to sharing his feelings about either! He maintains a shared enmity with his Decepticon counterpart Soundwave, with whom he shares his powers over all forms of sound, and is often backed up by a team of his own Autobot Mini-Cassettes to match Soundwave's mini-minions on the battlefield.

His alt-mode is a Boombox/F-117 Nighthawk. 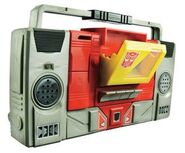 Blaster in F-117 Nighthawk Mode.
Add a photo to this gallery
Retrieved from "https://beastwarstransformers.fandom.com/wiki/Blaster?oldid=44187"
Community content is available under CC-BY-SA unless otherwise noted.