The other Decepticons don't care much for Blitzwing. Oh, they can respect that he's an absolute terror on the battlefield, using his triple-changing ability to maximum effect. Few things are more destructive and demoralizing to an enemy force than a tank landing on your front line at Mach 2. Blitzwing changes forms rapidly in battle to keep his opponents off-balance at all times. And through it all, he's laughing like a madman, because smelt it, it's just funny to him.

What makes him such a pain to his teammates is that Blitzwing's sense of humor rivals even Skywarp's for brainless thuggery. He's an unlikable, blustering, loudmouthed jerk to everyone. The Decepticons as a group may be an unpleasant bunch, but Blitzwing takes the cake, platter, tablecloth, and has ground the table underfoot.

Recently, though, components of Blitzwing's abrasive personality seem to be splitting and amplifying; sometimes his cold-sparked strategic side is forefront, other times he remains consumed with raging bloodlust, and others, he's just plain I-think-I'm-hilarious bat-scrap loco. You never know which of the three you're going to have to deal with at any given moment, as he will even change in mid-sentence... but all three outcomes are going to be unpleasant in some way. Thankfully for Megatron, the Decepticon Beserker is easy to manipulate, given Blitzwing's unstable mind. 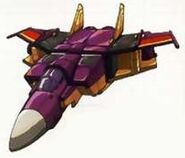 Blitzwing in MiG-25 Mode.
Add a photo to this gallery
Retrieved from "https://beastwarstransformers.fandom.com/wiki/Blitzwing?oldid=45153"
Community content is available under CC-BY-SA unless otherwise noted.