There's only one thing Autobots and Decepticons both agree on with no war or argument, and it's this: Blot is the most vile and disgusting Transformer ever assembled. He oozes fluids of questionable nature from various joints on his frame, and has a rank odor that usually keeps foes and allies far away from him. Naturally, all this scorn and insult has given the less-than-smart Blot quite the inferiority complex. Stuck with a hygiene problem he can't control and a central processor a few hertz too slow, Blot is both unable to solve the problems of his own stench and talk back to the insulting comments from his peers. Brutish and slow-witted, Blot is the classic dumb bully to those who don't give him respect... although he's not sharp enough to tell when said respect is faked. He's immensely loyal to those who at the very least pretend he's worth something, and Hun-Gurrr in particular is a Decepticon to whom he shows unwavering support.

The other Terrorcons, on the other hand, tolerate Blot enough, but are apprehensive about combining into Abominus with him, as it takes far too long to remove the stench he's passed on to them after they're finished.

His alt-mode is a Mole Monster. 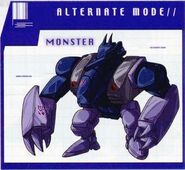 Rippersnapper in Mole Monster Mode.
Add a photo to this gallery
Retrieved from "https://beastwarstransformers.fandom.com/wiki/Blot_(Terrorcon)?oldid=19819"
Community content is available under CC-BY-SA unless otherwise noted.