An artificial creation of the Vok, "Brigadoon" soared across prehistoric Earth, containing great power and dangerous defenses. This flying island was completely surrounded by a cloud which hid it from view, yet within, it was lit as though the sun were shining. The island contained an ecosystem with bodies of water, plants and insect life. At its center, a massive obelisk rose out of a small building. The obelisk's pyramid-shaped top contained an eye-like image, a symbol which represented the island as a whole on the Alien Disk.

Despite its peaceful appearance, Brigadoon was loaded with death traps, although each trap was marked with a symbol, allowing anyone to avoid the traps if they recognized the pictures' significance in time. The ones seen included single large, deadfall rocks; triggered landslides; and a pitfall, and there may have been other varieties. Additionally, the obelisk in the center would fire an extremely potent energy blasts at anybody who used a weapon on the island, though it required a small amount of time to charge up between shots. The tower could also unleash a swarm of smaller spheres of energy. 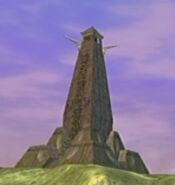 The obelisk on the flying island. 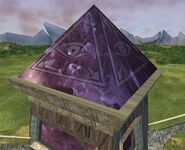 The top of the obelisk on the flying island. 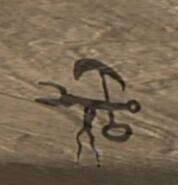 The symbol indicating a trap on the flying island.
Add a photo to this gallery
Retrieved from "https://beastwarstransformers.fandom.com/wiki/Brigadoon?oldid=11437"
Community content is available under CC-BY-SA unless otherwise noted.