Fast and intelligent, bored and lonely, Cosmos has reason to regret his abilities, which often separate him from his Autobot friends. Alas, his skills are far too extraordinary to ignore.

Few of his faction can achieve escape velocity and enter planetary orbit unaided, as he can, from planets as big as Earth or slightly larger. He carries fuel reserves sufficient for short orbital journeys; he is quite able to land on Earth's Moon, then take off and return to Earth. Cosmos enjoys such diversions immensely. Generally, however, he remains in orbit, relaying messages, observing enemy installations, and watching for Decepticon activity in nearby space. His optical sensors are able to observe a human radio host standing outside in the high desert from 600 miles up.

As a living Transformer, his advantage over a simple satellite is great, but it is a boring life for Cosmos. Every so often he breaks the monotony by hovering eerily above the backyards of Earth citizens, drifting silently behind the cars of lone drivers with his running lights on, or briefly jamming TV transmissions with reruns of The Outer Limits. He has also been known to zigzag through meteor showers on a clear night, showing off his space piloting skills. Naturally, this causes some consternation to the poor humans he is supposed to defend, but it's all in good fun. Primus save us from bored techies.

His alt-mode is a UFO. 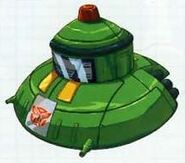 Cosmos in UFO Mode.
Add a photo to this gallery
Retrieved from "https://beastwarstransformers.fandom.com/wiki/Cosmos_(Autobot)?oldid=44172"
Community content is available under CC-BY-SA unless otherwise noted.