Dark Energon is a powerful, unstable and corrupted version of energon which can be used as a violent weapon and explosive. As energon is the emanation of Primus, from which all Transformer life and power is formed, Dark Energon is similarly the emanation of Unicron, released after his first battle with the thirteen original Transformers. Even the smallest particle of Dark Energon can corrupt any amount of regular energon. Dark Energon can be used for a number of deadly uses such as increasing one's power, reviving the dead, corrupting Transformers and even weakening some. It appears to be functionally identical to Angolmois energy. 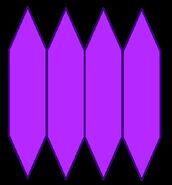 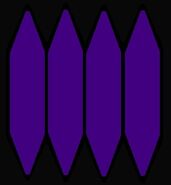 Black Energon crystals with Dark Purple energy.
Add a photo to this gallery
Retrieved from "https://beastwarstransformers.fandom.com/wiki/Dark_Energon?oldid=9352"
Community content is available under CC-BY-SA unless otherwise noted.