Despite his great power, size, and rank, Fortress Maximus is a weary and reluctant warrior. Fighting is against his pacifist nature, even for the most noble of causes. Over time, the endless conflict on Cybertron has worn him down, to the point that he's willing to walk away from the war entirely to preserve himself and his ideals.

Fortress Maximus is big. How big generally depends on the universe, but often as not he's binary-bonded to a smaller robot named Cerebros who forms his head; Cerebros's own head is formed by Spike.

Fortress Maximus is one of those fun characters whose English comic, English cartoon, and Japanese cartoon incarnations were very different. See individual fiction entries below for continuity specific profiles.

His alt-mode is a Fortress/Battle Station. 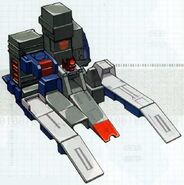 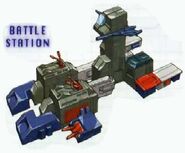 Fortress Maximus in Battle Station Mode.
Add a photo to this gallery
Retrieved from "https://beastwarstransformers.fandom.com/wiki/Fortress_Maximus?oldid=8839"
Community content is available under CC-BY-SA unless otherwise noted.