Grotusque laughs at life and everything in it. Why shouldn't he when nothing out there could ever be as frightening as his own reflection in the mirror? Still, Grotusque gamely laughs off even his own hideous appearance and alternate mode with a joke about Primus having had a little too much high-grade energon that day.

He's jovial, upbeat, and irreverent by nature despite his frightening exterior. To the frequent amusement (and sometimes annoyance) of his comrades, Grotusque can be counted on to fill the air with laughter and lighthearted jokes in even the darkest or least appropriate of situations. To their dismay he's simply incapable of taking anything totally seriously. Yet they have little other reason to complain, even if there are rumors he was once on the other side of the war; Grotusque's courage is legendary and he's a top-notch fighter. He's also quite brilliant at his function as strategist, with a sharp and analytical mind that's perfect for planning masterful campaigns (and witty quips). Fighting is fun, in Grotusque's opinion, or he simply wouldn't do it, and, in the end, death is as much a joke as life, so smile and laugh a little, and enjoy yourself while you're here.

His alt-mode is a Sabertooth Winged Tiger. 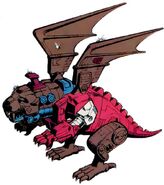 Grotusque in Sabertooth Winged Tiger Mode.
Add a photo to this gallery
Retrieved from "https://beastwarstransformers.fandom.com/wiki/Grotusque?oldid=8876"
Community content is available under CC-BY-SA unless otherwise noted.