Heavy Load is as bulky as his name implies. His thick armor intimidates even the toughest Decepticons, but his bulk does not inhibit his movement. To the contrary, he's studied martial arts and can move as gracefully as the most lithe of Transformers. Heavy Load is the most powerful of the Build Team (not to mention the loudest) and is always quick with a joke. He tends to play mentor to the team's young leader Wedge.

Sometimes he is known as Build Typhoon.

His alt-mode is a Dump Truck. 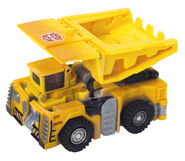 Heavy Load in Dump Truck Mode.
Add a photo to this gallery
Retrieved from "https://beastwarstransformers.fandom.com/wiki/Heavy_Load?oldid=8892"
Community content is available under CC-BY-SA unless otherwise noted.