Hightower is a member of the Build Team, and their best marksman. Oddly, his particular weapon of choice is the rather imprecise flamethrower. He's a bit of a fanboy to Wedge, acting as both a bodyguard and advisor to the team leader.

Sometimes he is known as Build Cyclone.

His alt-mode is a Crane Truck. 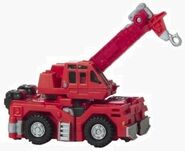 Hightower in Crane Truck Mode.
Add a photo to this gallery
Retrieved from "https://beastwarstransformers.fandom.com/wiki/Hightower?oldid=8893"
Community content is available under CC-BY-SA unless otherwise noted.