Hound wishes he were human. The dark, barren metalscapes of Cybertron no longer interest him. Now that Hound has been shipwrecked on Earth, he considers this planet his home. He sees humankind as beautiful and wishes he could interact with their ecosphere the same way they do, to feel what they feel and to see what they see.

He treasures his job as an Autobot scout, making good use of his ability to project holograms for added disguise. He uses this opportunity to explore the breathtaking caverns and mountainous expanses that Earth provides. He's a meek, benevolent soul, even compared to his fellow Autobots. He gets along with the more blood-thirsty of their ranks but not the most blood-thirsty of their ranks.

His nicknames are Sarge, Nose, and Sniffer.

His alt-mode is a Mitsubishi J59. 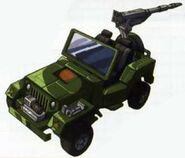 Hound in Mitsubishi J59 Jeep Mode.
Add a photo to this gallery
Retrieved from "https://beastwarstransformers.fandom.com/wiki/Hound?oldid=44160"
Community content is available under CC-BY-SA unless otherwise noted.