Few bots are as gung-ho as Inferno, whose heat-resistant body and seeming lack of fear make him a tough customer in any kind of emergency. He certainly prefers the thrill of gunning down Decepticons over tackling a four-alarm fire, but he doesn't let his thirst for battle interfere with his duty as a rescue bot.

Amusingly, he's the rational, cautious one in the odd-couple friendship he has with Red Alert.

His alt-mode is a Mitsubishi Fuso Fire Truck. 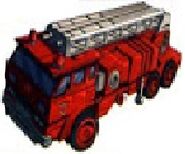 Inferno in Mitsubishi Fuso Fire Truck Mode.
Add a photo to this gallery
Retrieved from "https://beastwarstransformers.fandom.com/wiki/Inferno_(Autobot)?oldid=44179"
Community content is available under CC-BY-SA unless otherwise noted.