Laserbeak is not usually found on the front lines of battle. His chosen role is that of the spy, lurking in unseen corners and inconspicuous perches, snatching up any useful information he can to relay to his superiors. He has also been known to serve as an interrogator, using his lasers to carve up helpless prisoners to extract anything and everything they know. On occasion he's even played the role of assassin, striking quickly at unsuspecting (and particularly vulnerable) targets, and vanishing in a flash in the chaos following the attack.

He much prefers this "hide and sneak" tactic, as to his core, Laserbeak is a coward. Should his weapon's energy reserves start running dry, he starts running for the hills. A sufficiently big threat will also send him screaming off for the horizon at top speed. His self-preservation habit even dictates his attitude towards Decepticon leadership power-shifts: he basically allies himself with whoever's in charge at the moment, a loyalty that can vanish almost instantly once the reins of power change.

His alt-mode is a Condor/Micro-Cassette 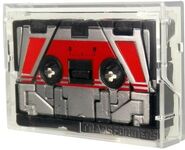 Laserbeak in Microcassette Mode.
Add a photo to this gallery
Retrieved from "https://beastwarstransformers.fandom.com/wiki/Laserbeak?oldid=8930"
Community content is available under CC-BY-SA unless otherwise noted.