If mighty Megatron were to command Lugnut to jump, the powerful Decepticon would be in the upper atmosphere long before his master could specify how high. In Lugnut's optics, bold, heroic Megatron embodies the Decepticon cause, and his devotion is total. It's easy to misinterpret Lugnut’s blind zeal for a lack of overall processing power, but this is not the case. Although he isn't much of a thinker or planner, Lugnut does not care, for wise Megatron is brilliant enough for a thousand Decepticons. His master makes the plans, and Lugnut carries them out. However, that blind loyalty is his weakness. Although innovative on the battle field, he does little thinking about anything else.

Besides his compulsion to serve Megatron, the only other driving force in his programming is to destroy the Autobots. Renowned throughout Cybertron as one of the most destructive fighters for the Decepticon cause, Lugnut has no time or patience for contemplation or strategy when he could just as easily level an entire Autobot battalion with a single explosive punch. He knows that his unparalleled strength, endurance, and seemingly limitless missile payload is enough to serve glorious, bold, fresh-scented, bright and shiny MEGATRON! Autobots that know him know the only way to survive a fight with him is to stay clear of his path.

He will only keep company with Decepticons who are as loyal to the grand and imperious Megatron as he is. Traitors and disgraces such as Starscream and Lockdown are not worthy of mention, let alone being in the presence of the glorious Megatron. Granted, even magnanimous Megatron himself can get a little tired of Lugnut's praises, but he keeps it to himself, lest Lugnut should lose faith in mighty Megatron.

His alt-mode is a Bomber Airplane. 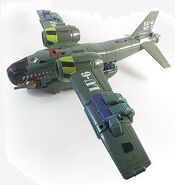 Lugnut in Bombe Airplane Mode.
Add a photo to this gallery
Retrieved from "https://beastwarstransformers.fandom.com/wiki/Lugnut?oldid=8962"
Community content is available under CC-BY-SA unless otherwise noted.