Mach Kick is a Transformer in the Beast Wars Universe. He is among the Maximals on the starship, the Gung Ho. His beast mode is a Horse. He was the sub-commander of a Maximal courier group known as the Thoroughbred Corps until most of its members were killed by Magmatron and the Predacons. He was the last survivor. He later joined Big Convoy and his students. 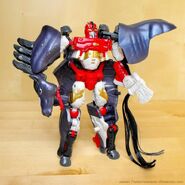 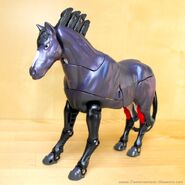 Mach Kick, MAXIMIZE!
Add a photo to this gallery
Retrieved from "https://beastwarstransformers.fandom.com/wiki/Mach_Kick?oldid=10964"
Community content is available under CC-BY-SA unless otherwise noted.