The Na'vi are a race of sentient extraterrestrial humanoids who inhabit the jungle moon of Pandora. Humans are known to refer to them as blues, savages, the locals or the natives. Parker Selfridge at one point in the movie refers to them as blue monkeys.

The indigenous Na'vi are, on average, three to four meters (10 feet) tall or (12 feet) tall since some are twice our own height they have a smooth cyan-colored skin, large amber eyes, and long, sweeping tails. They are the only known extraterrestrial species discovered to have human-like consciousness and intelligence. They have developed a sophisticated culture based on a profound spiritual connection to other life on their moon, each other, and an encompassing "spirit" they call Eywa.

The Na'vi seem to have a different evolutionary ancestor to other creatures that share two pairs of eyes and three pairs of arms-legs-or-wings, but they have a Queue which provides the ability to make a bond with the environment. 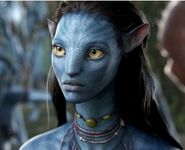 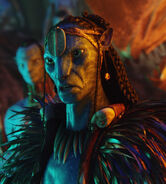 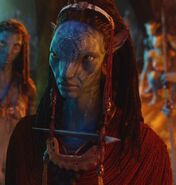 Mo'at
Add a photo to this gallery
Retrieved from "https://beastwarstransformers.fandom.com/wiki/Na%27vi?oldid=13174"
Community content is available under CC-BY-SA unless otherwise noted.