Noctorro is a Transformer in the Beast Wars Universe. He is a member of the Maximals. His beast mode is a fusion between a Bull and a Bat. He relies on his own body during combat instead of weapons. His short temper coupled with great strength make him a very dangerous opponent. 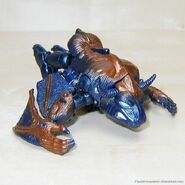 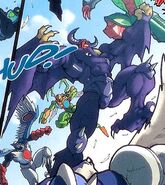 Noctorro in the Beast Wars comics.
Add a photo to this gallery
Retrieved from "https://beastwarstransformers.fandom.com/wiki/Noctorro?oldid=5414"
Community content is available under CC-BY-SA unless otherwise noted.