Omega Supreme is one of the largest Autobots there is. He isn't much for words, preferring his massive frame and equally massive weapons to do the talking for him. Omega is the last line of defense for the Autobots, a titanic guardian robot capable of instilling fear and panic into the sparks of Decepticons that dare face him on the field of battle.

Except Buzzsaw. Kill that little guy, it just makes him angry.

His alt-mode is Rocket Defense Base – Rocket – Tank. 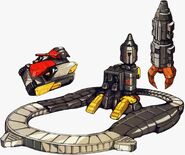 Omega Supreme in Rocket Defense Base – Rocket – Tank Mode.
Add a photo to this gallery
Retrieved from "https://beastwarstransformers.fandom.com/wiki/Omega_Supreme?oldid=44185"
Community content is available under CC-BY-SA unless otherwise noted.