Optimus Prime is the awe-inspiring leader of the Autobot forces. Selfless and endlessly courageous, he is the complete opposite of his mortal enemy Decepticon. Originally a mere civilian, he was chosen by the Matrix to command, the first in a number of heavy burdens he has been forced to bear. Another is his bringing of the Transformers' conflict to Earth. Every casualty, human or Cybertronian, weighs heavily on his spark. He does not show this side to his soldiers, and he never succumbs to despair. The Autobots need a decisive, charismatic leader, and that is what he gives them. It was that leadership which turned the tide of the Great War.

On the battlefield, there are few who rival Optimus Prime's prowess. He is easily the strongest of any Autobot his size, and his ion blaster and his energon-axe are deadly weapons. He would sacrifice his life to protect his fellow Autobots or those under their care, and does so on a regular basis. His compassion for other sentient beings is his only real weakness, and one the Decepticons have taken advantage of time and again... though it's also the source of his strength!

Prime carries within him the Matrix of Leadership.

His alt-mode is a Freightliner FL86 COE semi-trailer truck and was later upgraded an All-terrain expeditionary fighting vehicle. 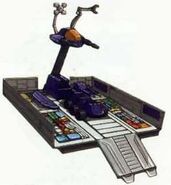 A hologram of Optimus Prime reaches down to pick up Optimus Primal.
Add a photo to this gallery
Retrieved from "https://beastwarstransformers.fandom.com/wiki/Optimus_Prime?oldid=44152"
Community content is available under CC-BY-SA unless otherwise noted.