Edit
watch 01:36
We're Getting Mutants in the MCU - The Loop
Do you like this video?
Play Sound

Discovered by space telescopes at some point between 2050 and 2077, Pandora has been the single most interesting thing to happen to the human race in hundreds of years. The news services love to run clips of the wild scenery on Pandora and its bizarre flora and fauna.

To the cultures of Earth, Pandora is mysterious, primal and terrifying. Even from orbit, the scope of florae present on the surface indicates a moon brimming with life. One of the creatures on Pandora is the Direhorse, a gray-skinned, hexapodal horse-like animal with bioluminescent qualities that the Na'vi ride when hunting. The Na'vi also ride the mountain banshee to hunt from the air, but the hunter can become prey in the presence of the Great Leonopteryx. In the canopy below, other deadly yet exotic animals roam: vicious packs of Viperwolves, thick skinned Hammerhead Titanotheres and the most fearsome creature of all, the Thanator. Other than the color, the trees resemble those of Earth. They have the familiar trunks, branches and leaves, though due to the difference in gravity, many of the shapes appear strange to humans and the proportions are greater because of the lower gravity. The trees and plant life of Pandora have formed electrochemical connections between their roots and effectively act as neurons, creating a moon-wide "brain" that has achieved sentience, which is known to the Na'vi as Eywa.

Pandora, despite being almost as large as Earth, is only a moon of the gas giant Polyphemus, which has thirteen other moons. However, due to the smaller size, its gravity is 20% less than Earth's. Due to Pandora's lower gravity, most creatures on Pandora are hexapods (six-legged), although the Na'vi resemble humans and have only two legs. Creatures roam the air and forest canopy below, similar to Earth's animals, but on a scale several times larger. Pandora's wildlife also have bioluminescent qualities. Depending on the position of the various moons, Pandora can have two or even three moons in its sky at once. Pandora and the other moons cast large black shadows on Polyphemus.

Pandora looks like a lush paradise by Earth standards during the day, but at night, virtually all life on the moon exhibits bioluminescent qualities in various shades of blue, purple and green. This possibly explains the Na'vi's blue skin color, which most likely provides them better camouflage at night on Pandora. 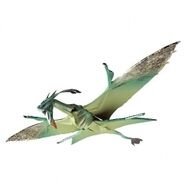 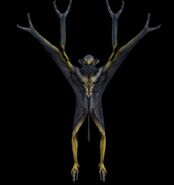 A Tetrapteron
Community content is available under CC-BY-SA unless otherwise noted.
Advertisement