Perceptor is a scientist, one of the most astute minds the whole of Cybertron can offer. He is perpetually seeking to increase knowledge, and his discoveries have repeatedly proven invaluable. Though his specialties lie in metallurgy, electrical engineering, and additional sciences closely concomitant to Transformer physiology, his thirst for knowledge has made him a kind of scientific jack-of-all-trades.

One of Perceptor's most infamous mannerisms is his tendency to engage in verbal communication using scientific terminology. This has the unforeseen result of exasperating and occasionally frustrating his comrades. One might hypothesize that the jovial mechanoid is unaware that not everyone with whom he seeks to communicate shares his extensive vocabulary.

Engaging in physical melee is not his preferred activity. He is content to make his contributions to the Autobot cause in the manner in which he deems sufficient, but will engage in combat if the situation requires. Optimus Prime often relies on Perceptor's perspicacity, and considers him as inestimable as any of his officers.

His alt-mode is a MC-20 Microscope. 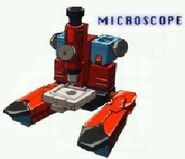 Perceptor in Microscope Mode.
Add a photo to this gallery
Retrieved from "https://beastwarstransformers.fandom.com/wiki/Perceptor?oldid=44184"
Community content is available under CC-BY-SA unless otherwise noted.