The middle of the three Autobot Brothers, Prowl II is very much unlike his siblings in that he lives life "by the book," and wants to make sure everyone else does too. He's proud to be a police officer and works to maintain discipline both among humans and his fellow Autobots. Prowl usually speaks in a clipped firm manner as he informs all around him of what they have recently done wrong. His strict reliance on the rulebook often hinders him from thinking creatively, and he can also be so impressed by seeing someone else stick firmly to procedure that he won't analyze whether they're actually being helpful.

Not to give the impression he's a fool, though. He may be uptight, but his precaution has pulled the Autobots out of peril many times in the past. Not only that, but he's a solid hand-to-hand combat expert who won't back down from a fight... as long as protocol allows it.

His alt-mode is a Lamborghini Diablo Police highway pursuit vehicle. 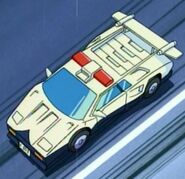