No Decepticon has a stronger loyalty to Megatron than Ravage. One of Soundwave's most reliable spies, Ravage believes unwaveringly in the Decepticon cause, and Megatron embodies that cause. To better serve Megatron and the Decepticons, Ravage has become the most efficient and deadly war machine under his command. He hides himself in the shadows, waiting for the perfect moment to strike with grim accuracy. His name is synonymous with stealth. His survivors are few.

Ravage's only weakness is bright light, which can temporarily blind him. Perhaps his absolute loyalty to Megatron can blind him as well.

Sometimes he's a talker, other times he just growls or hisses at anything that isn't Megatron or Soundwave.

At various times, Ravage has been referred to as Tripredacus Agent, Tri-Predacus Agent, or Black Panther Man (クロヒョウマン Kurohyō Man). It's all very confusing. 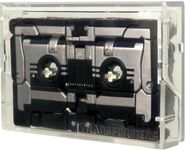 Ravage in Microcassette Mode.
Add a photo to this gallery
Retrieved from "https://beastwarstransformers.fandom.com/wiki/Ravage_(Decepticon_Mini-cassette)?oldid=8932"
Community content is available under CC-BY-SA unless otherwise noted.