Never a Decepticon, Repugnus is not always an Autobot. No, sometimes he's a former Autobot who has been discharged for insubordination or just plain nastiness, but he always gets called back to perform some mission too unsavory for anybody else. Though he doesn't give a slag for authority or decency, Repugnus always does his job well.

Man, does he love his job. He'll describe with relish how he clawed an enemy within an inch of his life, then beat the bastard's head into a fuel-soaked wad of scrap metal with his own torn-off leg unit. He'll also add plenty of profanities and colorful idioms to the story. His friends would find this disturbing, if he had any.

His alt-mode is a Bug-Like Creature. 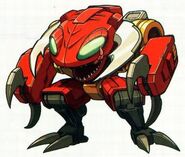 Repugnus in Bug-Like Creature Mode.
Add a photo to this gallery
Retrieved from "https://beastwarstransformers.fandom.com/wiki/Repugnus?oldid=8877"
Community content is available under CC-BY-SA unless otherwise noted.