Dangerous, wily and cunning, Scorponok possesses both a keen mind and a great deal of raw, savage power. He is equally comfortable with maverick stratagems and brute force, though he's built more for the latter: his animalistic alternate form bristles with weapons, from multiple paired cannons and the dreaded electro-stinger in his tail, to the crushing grip of his mighty claws. These traits combine to make him both a terrifying foe on the battlefield and a serious contender for leadership of the Decepticons. Often, only his arch-foe Fortress Maximus is capable of standing against him.

He is often partnered in some way with a being named Zarak.

His alt-mode is a Scorpion/Base. 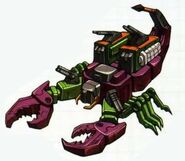 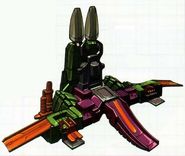 Scorponok in City Mode.
Add a photo to this gallery
Retrieved from "https://beastwarstransformers.fandom.com/wiki/Scorponok_(Decepticon)?oldid=9054"
Community content is available under CC-BY-SA unless otherwise noted.