Skullcruncher would be an apex predator and darling of the battlefield if it weren't for one little thing: He has an idiosyncratic habit of grinding his teeth before launching an attack. The racket this nervous tic produces is so loud and obnoxious it actually tips the enemy off to his whereabouts. So as one can imagine, few Decepticons wish to be partnered with him and his more enviable qualities go unnoticed and unappreciated.

Perhaps because of this feeling of dismissal, Skullcruncher has developed something of a binge-eating disorder. Or, rather, an "Autobot binge-eating disorder". While he thinks they taste a little yucky, Skullcruncher will ravenously scarf down as many Autobots as he can during battle, making him positively terrifying to the opposition. This image as a mindless, cannibalistic monster has only further solidified Skullcruncher's reputation as a big, dumb beast no one wants to hang out with.

Skullcruncher is binary bonded to the Nebulan Grax.

His alt-mode is an Alligator. 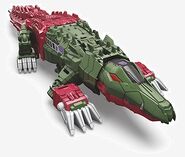 Skullcruncher in Alligator Mode.
Add a photo to this gallery
Retrieved from "https://beastwarstransformers.fandom.com/wiki/Skullcruncher?oldid=9046"
Community content is available under CC-BY-SA unless otherwise noted.