Sky Lynx is the unbelievably talented, unsurpassably skilled, and altogether magnificent robot behind most of the greatest, most adventurous, and most daring moments in all of Autobot history. At least, if you ask Sky Lynx, that is. Not that he isn't a skilled, fast, and powerful warrior, well deserving of his rank as Lieutenant Commander—he most certainly is all those things—he's just a rather bit too eager to tell you about it. At length. However, his superiors recognize his undeniable skill and tolerate his ego. Springer has nicknamed him "Commander Modesty."

Sky Lynx's unusual form grants him several abilities. As a shuttle, he can easily travel between star systems and carry passengers as well. When transformed, he can split himself into two autonomous components: a walking lynx and a flying bird-creature. His two components can also combine into a larger and more powerful lynx-bird-creature. In some universes, he can combine to form Sky Reign.

His alt-mode is a Space Shuttle / Bird / Lynx 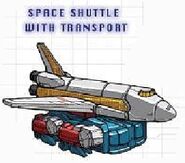 Sky Lynx in Space Shuttle Mode.
Add a photo to this gallery
Retrieved from "https://beastwarstransformers.fandom.com/wiki/Sky_Lynx?oldid=8835"
Community content is available under CC-BY-SA unless otherwise noted.