Slag (also called Slug due to the word Slag being regarded as profanity in some cultures) is the Dinobot most likely to live up to the team's bad reputation. Slag is surly, mean-spirited, nasty, and disturbingly violent, to the point where it really is a wonder he's not a Decepticon. Slag will fight anyone, over anything, at the drop of a microchip, and fight dirty. Slag enjoys nothing more than reducing his enemies (and he's more than willing to include annoying Autobots on that list) to pools of molten metal with his fire-breath. He'd swim in the pools to celebrate if he could.

None of the Dinobots really like Optimus Prime, but he and Sludge share an especially intense like of him. But it's not just Prime's orders he questions. He'll even mouth off at Grimlock every now and then, but somehow does not end up as scrap or lunch. Slag's bad attitude means the rest of the Autobot forces are unlikely to come to his aid when he bites off more than he can chew.

His alt-mode is a robotic Triceratops. 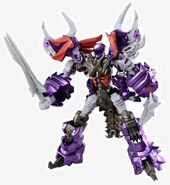 AOE-inspired G1 Slag in Triceratops Mode.
Add a photo to this gallery
Retrieved from "https://beastwarstransformers.fandom.com/wiki/Slag_(Dinobot)?oldid=45637"
Community content is available under CC-BY-SA unless otherwise noted.