Very often the source of the supposed "insults" is whatever message he's carrying in his function as a data courier. Berserker destructive rages aren't very good for recorded data, and often result in their destruction.

His alt-mode is a Stegosaurus/Microcassette. 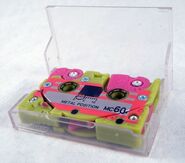 Slugfest in Microcassette Mode.
Add a photo to this gallery
Retrieved from "https://beastwarstransformers.fandom.com/wiki/Slugfest?oldid=8939"
Community content is available under CC-BY-SA unless otherwise noted.