If asked what three words would best describe himself, Snaptrap would likely answer "unstoppable killing machine" and then try to eat your brains. He truly earned his nickname of "Butcher of the Bogs" when he massacred an Autobot regiment in the Toxic Sludge Swamps on Cybertron. As powerful as he is deranged, escaping Snaptrap is impossible and defeating him is even harder. While his Seacon underlings all share a unanimous love of the hunt, Snaptrap prefers the capture and gutting of the prey. Fueled by an unquenchable bloodlust, even his fellow Seacons know to tread lightly in his presence, as even the slightest offense can invoke Snaptrap's psychotic brutality.

Snaptrap can combine with his Seacon warriors to form Piranacon.

His alt-mode is a Snapping Turtle. 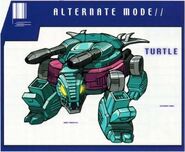 Bumblebee in Snapping Turtle Mode.
Add a photo to this gallery
Retrieved from "https://beastwarstransformers.fandom.com/wiki/Snaptrap_(Seacon)?oldid=9074"
Community content is available under CC-BY-SA unless otherwise noted.