Swoop is the friendliest and most outgoing of the Dinobots. He's surprisingly good natured, kind, and upbeat. Few of his comrades realize this however, as his team's reputation and his alt-form, considered (for some reason) particularly "horrifying" to Transformer aesthetics, makes others wary of getting close enough to learn about the bot himself. Swoop is an excellent aerial combatant and bombardier, and has become skilled at using the fear his alt mode creates in battle. He considers it his greatest weapon. Like all the Dinobots, Swoop tends to be arrogant, obedient, and generally agree with Optimus Prime's leadership style. He's also a bit of a show-off.

His alt-mode is a robotic Pteranodon. 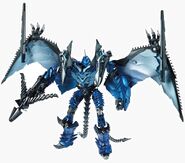 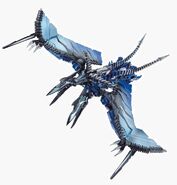 AOE-inspired G1 Swoop in Pteranodon Mode.
Add a photo to this gallery
Retrieved from "https://beastwarstransformers.fandom.com/wiki/Swoop_(Dinobot)?oldid=45639"
Community content is available under CC-BY-SA unless otherwise noted.