Thrust was one of the first of Megatron's Vehicon generals to be created, and was the last one to stand against the Maximals. Commander of the Motorcycle Drones, he is a dark, cold, brooding type, and is absolutely devoted to Megatron's goals, even though he knows what it means in the end for him. He is almost completely fearless, says exactly what is on his mind (he had the lugnuts to tell Megatron just how dumb his plan of using Maximal sparks to power the other two Vehicon Generals was), and takes a delight in tormenting his foes both physically and psychologically.

Oddly, despite initial backstabbing, he grew to consider his fellow General Jetstorm a friend, which developed into a white-hot hatred when Jetstorm was reverted into the Maximal Silverbolt. He refused to even call Silverbolt by his name, calling him "Jetstorm" and "traitor".

Thrust's personality and mind is in fact a shell program powered by the spark of the Predacon Waspinator. Despite this, Thrust has virtually no similarities to Waspinator, and the Predacon is very happy to be in the cool "biker-bot", even if only as a power source.

His Command Code is "overdrive," although in one anomalous instance, he used the phrase "accelerate."

Thrust can be distinguished from his drones by his size and yellow markings. 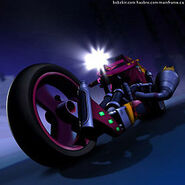 Thrust in Vehicle Mode
Add a photo to this gallery
Retrieved from "https://beastwarstransformers.fandom.com/wiki/Thrust_(Vehicon)?oldid=10107"
Community content is available under CC-BY-SA unless otherwise noted.