"Boy genius" Wedge is leader of the Build Team and chief architect and designer of Earth's subterranean Global Space Bridge. He and his team have never once missed a deadline, and are so devoted to their jobs maintaining and expanding the tunnels that they may go prolonged periods of time underground, totally unseen by either Autobots or Decepticons.

However, Wedge and his team also feel a need to prove themselves as warriors, which drives Wedge to be somewhat gung-ho about charging into battle. He's the definition of a hot head, and he'll ask to be put into battle at any chance he gets - especially when his pride as a builder and an Autobot are on the line. This can put him in harm's way, and also be somewhat obnoxious to his fellow Autobots, but Optimus Prime believes he can be hardened into a capable warrior.

When his team merges to form Landfill, Wedge has total mental control over their combined form, lending him new destructive power to back up his usual bravado.

Just how this inexperienced kid came to lead a team full of far more seasoned Autobots is anyone's guess.

Sometimes he is known as Build Boy. 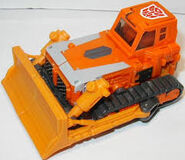 Wedge in Bulldozer Mode.
Add a photo to this gallery
Retrieved from "https://beastwarstransformers.fandom.com/wiki/Wedge?oldid=8890"
Community content is available under CC-BY-SA unless otherwise noted.